Quick Read: What do you call an ad that brilliantly grabs our attention – by its balls? Not the ones that are made to work like click baits,  but those made to create a meaningful and an impactful closure.

This picture recently shot by one Mr. Nick O’Donoghue at 30,000 ft from a plane has been doing the rounds on the Internet this week. (source)

Seeming to be featuring what looked like some huge robot walking along the clouds, these pictures got Reddit rife with juicy speculations.

An alien? An Iron Giant? Some astronaut?

Well the suspense seemed to have been solved.

Weather experts say that the phenomenon can be explained by what is called as Fata Morgana – a specific kind of mirage. (some cool explanation here)

No wonder, throughout history few phenomena have both fascinated and scared the hell out of sailors, saints, warriors and vacationers alike as it did.

But Fata Morgana is great because of what it quintessentially succeeds at.

Over centuries every Fata Morgana has attracted our attention, invoked curiosity, set our mental models in search of narratives that could explain it, and sent us on a great deal of wild goose chase.

But all Fata Morganas have one thing in common. They all made complete sense once the underlying logic and rationale were brought to bear.

..Fata Morgana is like an ad that brilliantly grabs our attention – by its balls. But not like those click baits, or those that come with some cheap attention grabbing visuals or effects.

These are stories ensconced in narratives that are deliberately layered to challenge our conventional expectations and shake up our notions of rationality. Yet when the closure arrives, these make eminent sense and leave an indelible impact in our minds.

The 35-year-old superstar is said to be one of the greatest soccer players to ever step on the field. Besides leading her team to World Cup victory, she also won two Olympic gold medals, became the world’s all-time leading goal scorer (man or woman), and was recognized as one of TIME’s 100 in 2015.

On 16 December 2015 she played her final game in New Orleans.

And on 16 December 2015 when she took the field for the last time, Gatorade released this commercial.

Her message? “Forget Me”

Ads that featured a ‘Before – After’ theme have been around since the dawn of mainstream media and have spanned several categories like beauty, wellness, automobiles, apparels, TV channels, hairdressers,beverages, pest control, fitness etc over the years.

Today, while most ads that execute this ‘before-after’ theme, smack of predictability…

There are those few that stand out for their sheer creativity and ingenuity – like the Reynolds Marker ad below: 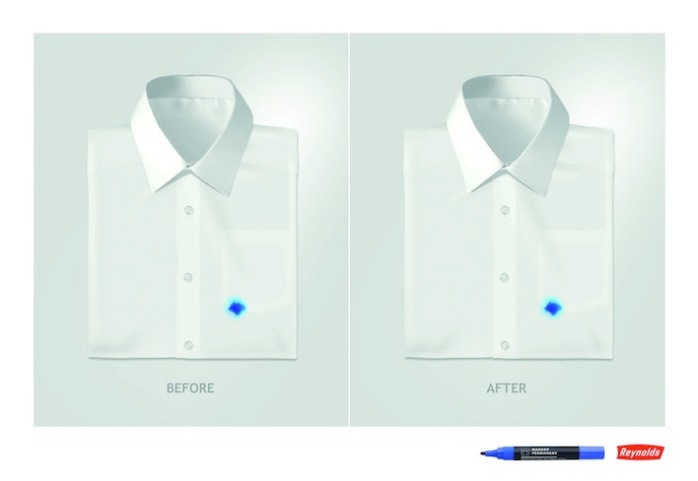 Medifast – a US based Weight Management Centre recently came out  with a great spin to this Before-After theme of advertising. Their campaign called Conversations With Yourself features actual people that underwent their weight loss program with a twist: the heavier version of the participant actually talks with his/her lighter self. Thanks to some clever editing and a ‘straight from the heart’ dialogue, these spots make for a very engaging viewing and strike a very strong chord with the viewers. Do check out all their 3 spots.

See all the 3 spots featuring Tina, Joseph and Kimberly here. Read more about the making of these spots here.

A great execution that powerfully lands (and personalizes) the key message around change.

Interestingly, in 2012,  a Norwegian Yoghurt brand called Tine, made use of this very construct to communicate the opposite – of some things NOT changing despite growing up. Check out the brilliant execution here:

Conversations with Yourself – as a construct – is rife with possibilities and can be a powerful  means to land ideas that resonate emotionally with the consumer and become strong hooks to the category.

Immensely liked the power and the simplicity of these spots.