Can fakes be branded?

Can fakes be differentiated and charged a premium for? Two recent examples show they bloody well can be!

A 24 hour escort is the norm for valuable paintings when they are transferred between museums. But a set of forged paintings have been recently extended security arrangements that rival that of the originals. Why?

Because these are not just any other fakes. They are imitation paintings by the world’s most notorious forger Han van Meegren the world war II era painter and master forger – who so well replicated the styles and colours of the legendary artists that the best art critics and experts of the time regarded his paintings as genuine and sometimes exquisite. His wikipedia page says that he is considered to be one of the most ingenious art forgers of the 20th century, so much so that his paintings including his signature have been subsequently forged as well! 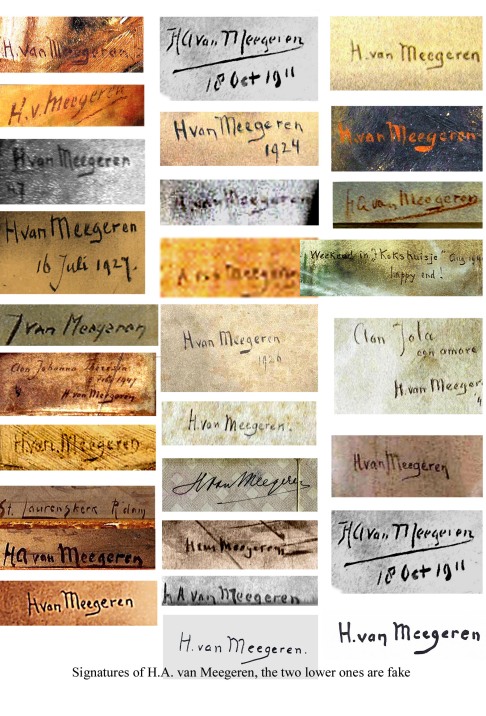 (Source, Wikipedia. A collection of genuine and fake signatures of Han van Meegeren)

Today his forged paintings are a brand on to themselves and are treated as prestigious artworks that require the same measures of security as the authentic ones.

Now this time, the story to brand the fakes of none other than the works of Vincent van Gogh comes with  its own coined term and a trade mark! Introducing Relievo™ 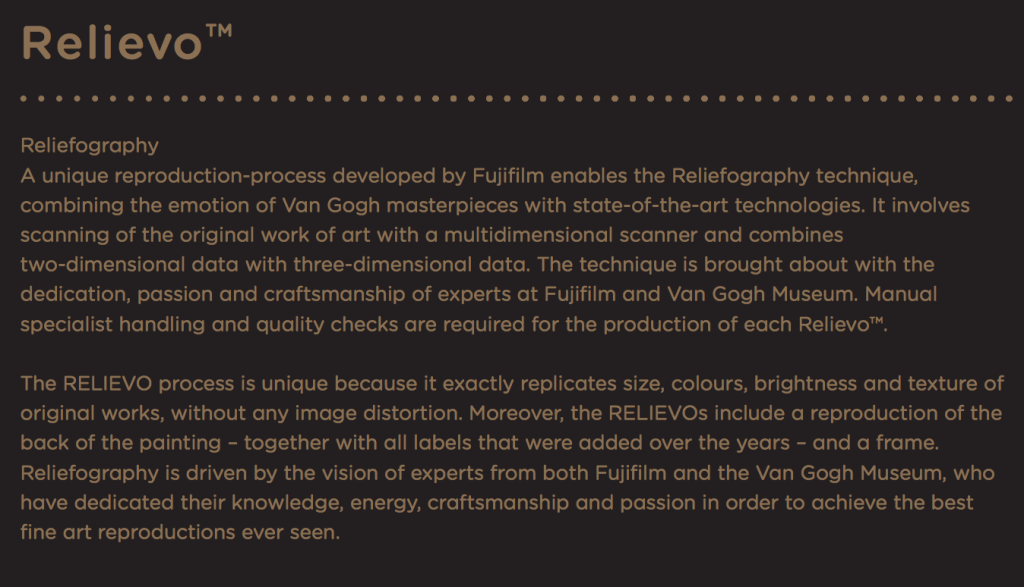 (Source: PDF on the Relievo Collection by the van Gogh Museum)

Interestingly this initiative to develop and sell the fakes of the legendary artist is being led by none other than the official van Gogh museum.  Accordingly to this post, the museum is hoping to increase access to pictures which, if they were sold, would go for tens of millions of pounds to Russian oligarchs or American billionaires.

The replicas, called Relievos, are being created by the museum in partnership with Fujifilm, with which it has had an exclusive deal for three years. Such is the complexity of the technology, known as Reliefography, that it has taken more than seven years to develop. It combines a 3D scan of the painting with a high-resolution print. The “super-accurate” reproduction even extends to the frame and the back of the painting. Every Relievo is numbered and approved by a museum curator. And best of all – there is a limited edition of 260 copies per painting.

A limited edition of fakes with each copy uniquely numbered and approved by the curator!!

Clearly, some fakes are more equal than others!

On a related note, even among commodity products, some brands can be more equal than others. And when they are, as always they make for an interesting marketing case study.

Double A – the paper brand for office supplies and photocopiers has an understandable challenge. Drive user preference in an extremely commoditised category.

So how did they do it? The recent ad campaign by Double A is a case in point. Read the full story here and see all the 4 featured ads in the post by L.Bhat. My favourite 25s spot below. (For email subscribers the URL to the video here)

(Turn on closed captions for subtitles)

[Featured Image: Wheatfield Under Clouded Sky by Vincent van Gogh. One of the paintings to be reproduced using the 3D printing technique Relievo™]

4 thoughts on “Commodities and Fakes. Branded”