The Ise Grand Shrine – a Shinto Shrine – in Ise, Mie prefecture in Japan has been preserved exactly like it was around 2,000 years ago. Despite such a rich legacy, the UNESCO has refused to list the shrine in its list of historic places. 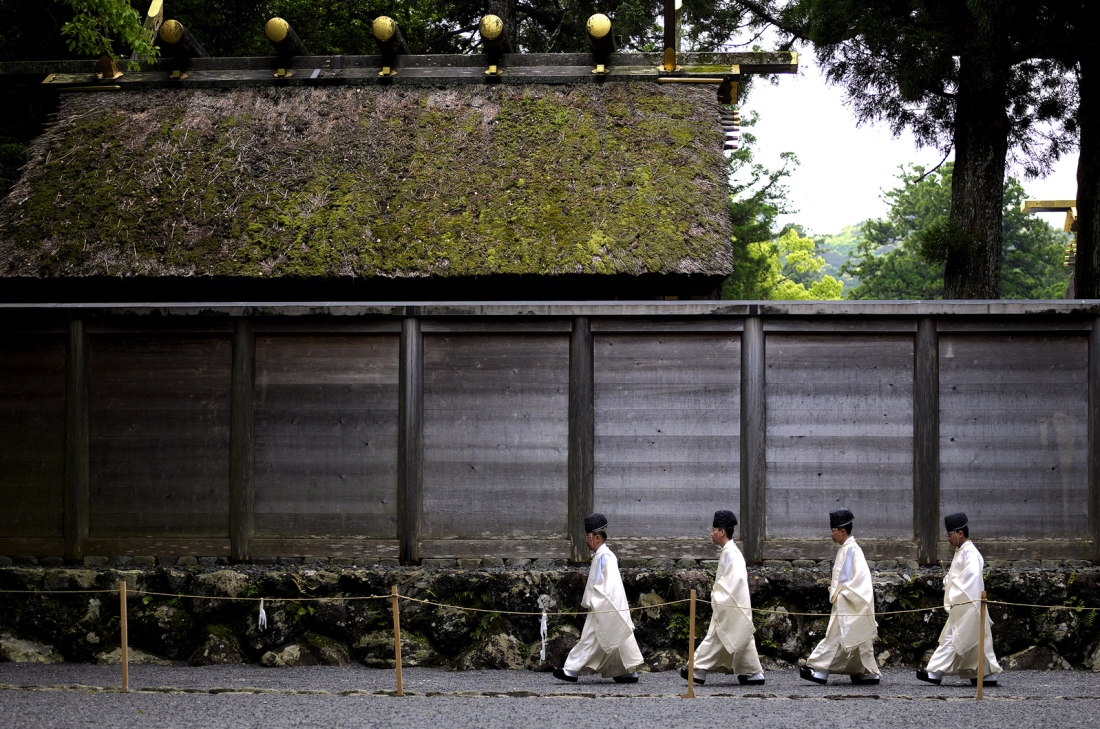 This is because the shrine is not built of a ‘permanent structure’. The ISe Grand Shrine is built of wood and hence it  gradually loses its structural integrity over years. So the Shinto priests have a solution;  every 20 years they tear down the structure and rebuild another – in an adjacent plot –  in exactly the same specifications as the original using the wood from the same forest that the original structure was built from. Result: the shrine  is  forever new,  ancient and original! The present structure, dating from 1993, is the 61st iteration to date and is scheduled for rebuilding in 2013!

A centuries old Shinto belief of death and renewal of nature and the transience  of all things called Wabi- Sabi underscores the philosophical and artistic significance of this shrine. To quote the wiki  page ….

Wabi Sabi nurtures all that is authentic by acknowledging three simple realities: nothing lasts, nothing is finished, and nothing is perfect.

Further to the west, in northern Nevada US is the Black Rock Desert –  an open swathe of desert land where a week long annual cultural festival called Burning Man is held every August/September. This iconic event is described as an annual experiment in community, art, radical self-expression, and radical self-reliance – a week long celebration of extreme creativity, art, spirituality and innovation. Often compared to TED for its potential to provoke, inspire, connect, indulge or just ‘let be’, Burning Man regularly attracts stalwarts like the Google founders, Eric Schmidt, Chip Conley among many many others. But what makes Burning Man stand out as an exceptional event is the fact that it is transient by nature. The whole venue, the structures and the shelters for the event are practically built from scratch and again torn to dust without leaving a trace at the end of the week!

See below the time lapse video of 2011 Burning Man to appreciate the ‘dust to dust’ cycle typical of the Burning Man.

Transience as a method, an approach or a strategy is not just  an expressionist arts style or some exotic charm of a shrine.  It also has far reaching implications on contemporary business strategy. The June 2013 edition of Harvard Business Review features an interesting article by Rita Gunther McGrath on what she calls as Transient Advantage. She argues that  in a world where competitive advantage often evaporates in less than a year, companies can’t afford to spend months at a time crafting a single long-term strategy. She introduces what she calls as The Wave of Transient Advantage and explains its ‘curve’ (below). Companies possessing this edge constantly start new strategic initiatives, build, exploit, re configure and if need be even actively disengage from an initiative as a means to reprioritise, reinvent and renew their approach to growth.

She posits that the thinking in this field “has reached an inflection point” leading to an acknowledgment from a multitude of strategy practitioners that “Sustainable competitive advantage is now the exception, not the rule. Transient advantage is the new normal.”

The latest post in the Gaping Void newsletter by Hugh Mac­Leod pays an artistic tribute to this concept through this delightful piece of ‘office art’.

(You must subscribe to his newsletter, sure to make your day!)

Essentially from which ever perspective you look at it – artistic, personal, emotional, professional or even strategic, the ability to accept transience as the new normal, the ability to let go of the status quo to rethink, re-invent and renew our  approach forms the bedrock of the new competitive edge – The Wabi Sabi Edge.

51 thoughts on “The Wabi Sabi Edge”