Fifty years ago, in the fictional world of Mad Men, Don Draper pitched a bold ad campaign to Heinz.

The ads showed close-ups of food that go great with ketchup— a cheeseburger, french fries, a slice of steak—but without any ketchup in sight.

The tagline: “Pass the Heinz.” 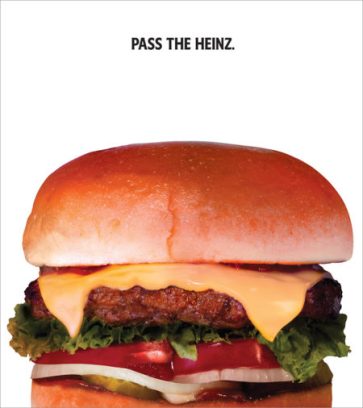 But the Heinz clients in the Mad Men episode called it “half an ad”. They wanted to see the bottle.

But now, in March 2017, in a meta union of advertising’s real and fictional worlds, Heinz green lighted the ads.

The best thing: Heinz is slated to run these ads almost exactly as Draper intended, in print and in OOH executions in the New York City. Read more here.

Regardless of the fact that these ads are part PR stunt, part on-brand communications, they have something great going for them.

For an insight into that, see any GoPro ad.

And ask the same question.

What do these GoPro Ads have going for them?

My favorite is the following one. (big H/T to Rob Campbell for this one)

As Rob raves about this ad in his post.

Look at it..Even if you’re not a skier, that photo makes you feel ‘in the action’. Literally in it.

You can feel the snow, the cold, the speed of the World rushing past you.

Now compare these GoPro ads to this one from Garmin for the same product category.

Or this one from Nikon.

These are all camera brands trying their hand at the “live action category”.

But seeing these, you could say that Garmin and Nikon have failed to understand a crucial distinction between a camera in the ‘live action category’ and that from the photographic category. Sure, they both involve a lens to capture the action, but fundamentally the rules, values and the culture around these categories are very different.

This knowledge influenced everything, from their positioning through to the style of advertising they created.

The fact  that Nikon’s (or Garmin’s) ads show an image that comes from the perspective of watching others do something, highlights how they have failed to understand the audience they are talking to.

So now my question again –  what do  these ads have going for them?

The New Range Rover Velar’s ad is another case in point.

From the very first second of the ad you are living it.

Thanks to the brilliant sound design, you feel the jungle cruising by you and the night looming over you.

The car almost becomes your sensory vehicle for this experience.

Now, if you look at them all, don’t these great ads have one thing in common?

Don Draper’s ‘Pass the Heinz’ creatives or GoPro’s ads or The New Range Rover Velar’s ad stand out because their executions are not about conforming to any of their respective ‘category codes’ but are about staying true to their respective ‘contextual codes’.

That’s perhaps why you don’t need to show the bottle.

As Don Draper said in his Heinz pitch..

“The greatest thing you have working for you is not the photo you take or the picture you paint. It’s the imagination of a consumer. They have no budget, they have no time limit. And if you can get into that space, your ad can run all day.”