Quick Read: Sometimes, the best idea for a brand campaign might be just around the corner, albeit with another category. Even when the core of the campaign idea is ‘Originality’. And perhaps rightfully so.

Inspiration from across the category fences is no new news. But that’s no excuse why we should take such instances for granted. Some recent examples of brands taking inspiration from other categories and appropriating them in a way that is relevant to their campaign idea/ brand personality. Virtual High Five (Coke – KLM) In May 2013, Coke had this huge hit campaign that ‘connected’ people from different countries (India – Pakistan) through what it called as ‘Small World Machines’.

Cut to this year (Sep 2014),  KLM gave a reason for Amsterdam and New Yorkers to ‘get connected’ through this Virtual High Five campaign.

As this article says, KLM’s deployment of this idea is clever because it underlines the message that while technology has the power to interactively connect people like never before, it’s airlines that have the ability to physically connect people faster, easier and more effectively than we have ever experienced in the past.

Unique, Original & Extraordinary (Absolut – Coke) In Sep 2012, I wrote about Absolut’s brilliant execution of their limited edition design series called Absolut Unique. A story of carefully orchestrated randomness powered by 35 different colors, 51 different pattern types all governed by algorithms meticulously devised to induce a method to this madness of design. 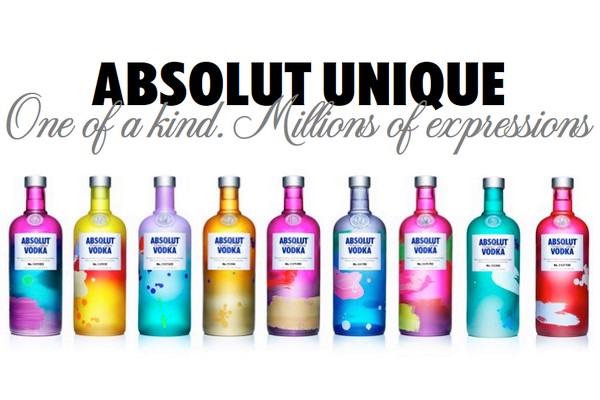 Result: A first of its kind design spectacle at a massive scale resulting in over 4 million bottles where no two bottles are alike. See the video here.

And then in 2013, Absolut followed this up with Absolut Originality. Video here.

Cut to this year (Oct 2014), a new campaign for Diet Coke in Israel revolves around the concept “Stay Extraordinary,”  as part of which it produced over 2 million different bottles using a printing system that printed every bottle with a different look. Video here.

Any other examples of well executed campaign ideas inspired from different categories?

It’s a luxury apparel brand riding on the wave of exclusivity. Each piece of ‘1 Like No Other’ shirt is produced in numbers that are just a handful assuring the wearer of its super exclusivity. Result: A business model that effortlessly commands a price premium for its products.

Lifestyle brands occasionally try their hand at evoking this tendency in us – of possessing (or collecting) something that we deem worthy or representative of ‘our unique self’. Enter product concepts that are a mash up of ‘uniqueness’ and ‘exclusivity’.

Absolut is known for its limited editions. This year it has taken this concept to a whole new level with Absolut Unique. A story of carefully orchestrated randomness powered by 35 different colors, 51 different pattern types all governed by algorithms meticulously devised to induce a method to this madness of design. Result: A first of its kind design spectacle at a massive scale resulting in over 4 million bottles where no two bottles are alike.

These bottles are now lined up for a global launch during September/October 2012.

Another recent example of a product that mashes up the concept of uniqueness with exclusivity is ‘The Cameo Ring’.

On the face of it wedding rings can just be a bunch of fancy, pricey rings. But for many people these rings are actually pieces of jewelry wrapped with a tremendous amount of emotional and symbolic value. Fired up by this insight Russell Greenberg set out to create the most personal ring in the world. Cameo by RUX.

Essentially each ring is custom designed based on the photograph of the person who is to wear it. The unique curves of the individual’s silhouette are then replicated to constitute the contours of this unique and exclusive ring.

This leads to the creation of custom jewelry that one can’t help but fall in love with because the ring is literally a part of him/her. In fact it ‘is’ the person in many ways.

As the designer puts it, this results in intimate art objects that are “beautifully discreet and timeless in design”. Interestingly he has now extended this concept to design custom baby rattles with ends shaped like profiles of the baby’s mom and dad!  

While these concepts are innovative and interesting owing to their ingenious design principles, what could be even more interesting is the consumer insight that they are based upon. Try to think of it for a moment. What is actually being sold here? What are you actually paying for?